Due to a bit of an oversight in the design process, early Bachman 08’s have always had issues with pickups that bear on the tread of the wheel, rather than the rear face as is more conventional. However, I’ve never actually had too many issues with this and the example we ran on Stoating Bank covered a couple of exhibitions with no problems.

However since moving on to SQ, we had found the trusty 08 had become a bit unreliable and it therefore spent most of the Canterbury show in the stock box. After the show I cleaned the pickups and the wheels and all seemed well again on BWS in the build up to Railex.

However, as anyone who has done a show knows, it’s impossible to replicate the conditions of a show in advance, and I was disappointed at Railex when after a couple of runs down the layout, both our 08’s were misbehaving. (Que Mark moaning…). This meant there were considerably more electric worked trains than the original plan dictated, although this turned out to be quite popular with the visiting public.

So how to improve the Bachman 08’s pickup arrangement? Given it must be quite a regular modification to make, a quick Google search on the subject didn’t bring up many results, the best I could find was buried in a thread on the Scalefour Society forum – so here is how I interpreted that and did it myself:

A couple of strips of copperclad superglued to the bottom of the chassis keeper place in roughly the middle provide a good place to work everything else from. The droppers passing through the frames can be soldered to the inner corners of these out the way. 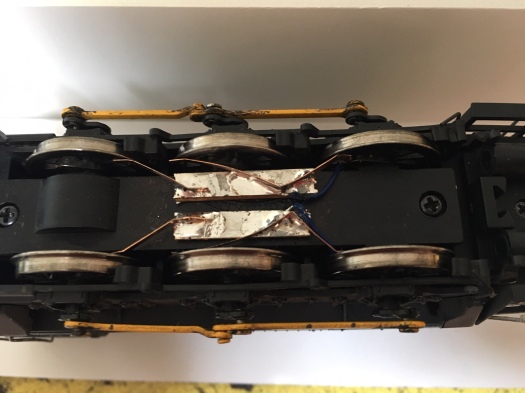 Using some pickup strip, this can then be bent up and soldered to the copperclad strip, so that it pushes against the rear of the driving wheels. There is no given way or style of doing this, just whatever works best for you. 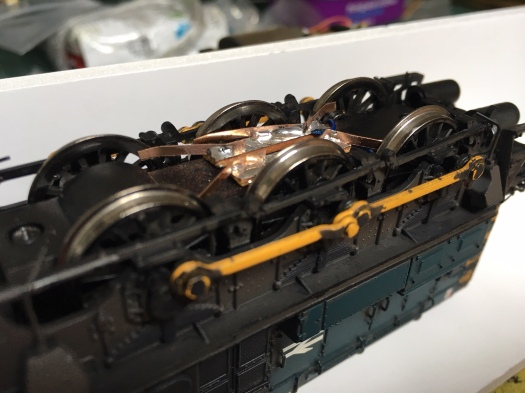 And all done, the pickups should exert a roughly similar pressure on both sides, so that you don’t end up with the driving wheels sitting at one end of their sideplay constantly, but other than that there doesn’t seem to be much that can go wrong.

You can then paint the shiny bits that aren’t in contact with the wheel faces a nice grimy black shade to blend them in with the chassis, although to be honest from the low angle shot above you can’t really see anything anyway.

And that is that. Less than an hours work and test running has shown things to be miles better than before. The original pickups are still doing their job too so the locos now have 2 pickups per wheel, much improving on the original setup…. the only real question is why didn’t I do it previously!

2 Replies to “Upgrading pickups on the Bachman 08”

A journey through a quarter-life crisis, weight loss and getting somewhere.

South Wales Steel in the 1980s

An enduring record of my P4 layout Kyle of Sutherland, which I scrapped in 2018, and the continuing work to upgrade and improve its finescale trains, locos and rolling stock

Off The Beaten Track
Model Railway Musings by D827 Kelly

The building, history, and operation of my HO scale Hitop branch model railroad

Amtrak in the Heartland

Devoted to the history and operations of Amtrak in the Heartland of America.

“Anything is possible on a train: a great meal, a binge, a visit from card players, an intrigue, a good night's sleep, and strangers' monologues framed like Russian short stories.” ― Paul Theroux, The Great Railway Bazaar

ayohcee
The Erratic and Wandering Journey

N-gauge modelling (and beyond....)

Come along on my knitting adventures!