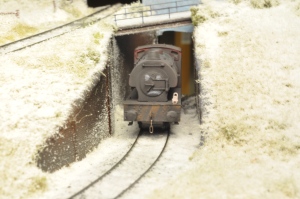 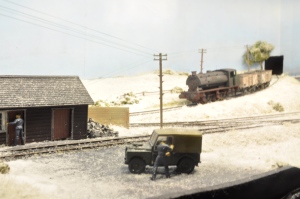 Stoating Bank was the first layout to be constructed by us working together as a team.

The layout was thought up just before Christmas 2011, after an overdose of caffeine and digestive biscuits made us think it would be a good idea to build a small, easy to transport layout that we could man at the club’s annual exhibition and get Oly out of selling sandwiches and sausage rolls to the public. Great idea, the only issue was that the show would take place in mid February, giving us around 7 weeks to get everything done! It must have been good coffee as we thought this would be easily achievable…..

A plan was devised featuring two main running lines, one heading uphill steeply at the rear and the other descending past some sidings in the foreground, with a small fiddle yard at each end. All we needed now was something to build it on- a rummage around in the loft came up trumps, with a single 4ft x 20 inch baseboard being discovered. This had been used previously as a fiddle yard on one of Chris’ old layouts, then had the beginnings of a small terminus layout built on it as well. Onto this the trackbed was built using 5mm foamboard available from Hobbycraft, all fitted together with copius amounts of glue gunnage.

Track is Exactoscale fast track bases with C and L code 75 bullhead rail. Points are hand made from copperclad strip. The layout is wired to separate the upper and lower tracks but otherwise works on the one engine in steam principle.

The snow was an afterthought – having built the landscape to look as natural as possible out of polystyrene covered in filler to provide a hard layer, we found that only one shade of static grass had been delivered, the others on order awaiting supplies. It was agreed to work with this colour initially, leaving us with a monotone layout looking like something from a 80’s railway modeller article! As the show date got closer and we realised the other colours were not going to show in time, snow was turned to in order to break up the green.

Keep an eye out for the layout in the April 2013 edition of Model Railway magazine, featuring some stunning photos taken by Chris Nevard!